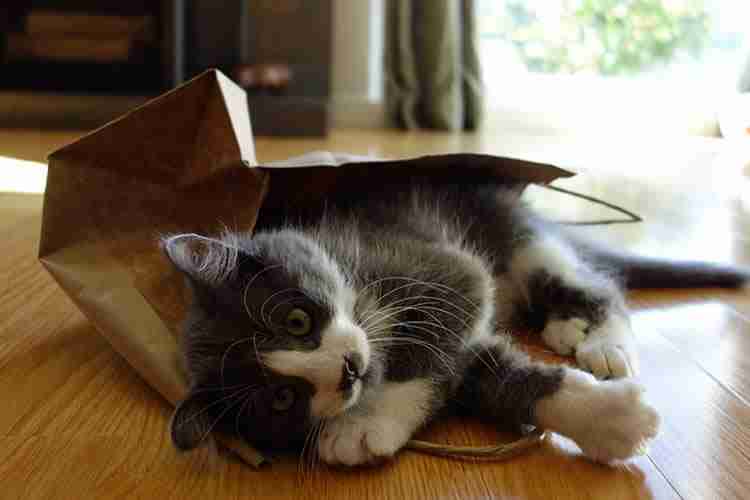 Each one of us has wasted at least a few minutes of our lives watching animal videos, which means odds are high that you’ve seen a fluffy cat throw himself into a too-small cardboard box — and succeed! I see this in my own home as well. When I unpack groceries from a brown paper bag, I “accidentally” leave it on the floor so my oversized house cat can be easily entertained for awhile. I act as if I don’t see or hear her 15-pound body filling up the bag and let her swat at my ankles as I innocently walk past. She thinks she’s a ninja, and I’m just thrilled she’s exerting any amount of physical energy.

The same goes for shipping boxes, suitcases and other containers. If she can get in, on or under it, she’ll do it.

Virtually all cat owners know of their pets’ affinity for boxes and bags, but the reasons behind this fascination generally remain a mystery to the common man. Animal behaviorists and veterinarians, however, have much more insight into the appeal of both bags and boxes for domestic felines.

A domestic cat’s lineage leads back to wild felines whose lives were endangered on a regular basis — much more so than your (or my) lazy house cat. To survive, they often sought out confined spaces that allowed them to not only hide, but reduce their vulnerability by narrowing their field of vision. In the wild, this could mean a cave, den or even a treetop, but in today’s world, it may be a new shoebox left on the closet floor. Once in their secret perch, cats tap into their genetic predisposition as ambush predators, attacking threats like other animals and passing ankles.

It comes as no surprise to most pet owners to hear that cats spend up to 20 hours a day sleeping. And like any other living being, they’re most vulnerable during that down time. To stay safe, cats often hole up in a cozy spot for their long siestas, curling up into a tight ball of fur. (Perhaps believing “the tighter I curl, the less I’m seen”?)

This strategy also serves another purpose. Cats are comfortable at a higher temperature than humans; scientists say between 86 and 97 degrees Fahrenheit. That’s easily 10 to 15 degrees above the standard thermostat setting of the average American home. So your kitty is not only playing it safe by napping in that box, but he’s also working to maintain his body heat since he can’t manipulate the thermostat himself. (And corrugated cardboard is a great insulator, it turns out.)

Hiding in boxes and bags also serves as a coping mechanism for domestic cats. From environmental changes like loud noises and unfamiliar visitors to other stressors such as physical pain, boredom or sadness, indoor cats often take comfort in a cozy, quiet spot. A confined space feels safe and allows your furry friend to rest and relax.

Some cat owners notice that their pets are drawn to plastic shopping bags in particular, and the reasons for this attraction are vague. Some believe that cats’ strong sense of smell can pick up on the previous contents, since plastic is porous and retains odors easily. Others think the interest stems from the crinkling sounds the plastic can create, which may mimic the scurry of rodents and other small critters that appeal to felines.

Whatever the explanation, plastic bags do serve as serious choking hazards for any living being, so be cautious if you let your pet play with them.

The appeal of boxes and bags is an innate one for cats, so encourage that natural connection to their old-school heritage by leaving that Amazon box on the floor a little longer than normal. Your furball will thank you!

Why Do Cats Like Boxes (& Bags)? was last modified: December 16th, 2017 by Emotional Pet Support Team