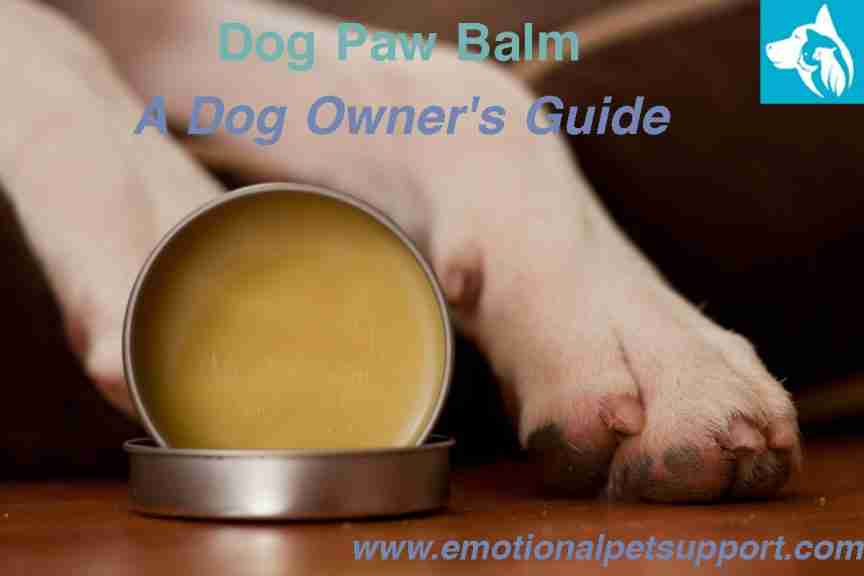 Most dog lovers will agree that the obsession with their dog’s paws ranks pretty high on the list of things they love most about their dogs. Then there is that nose, those manipulative but heart-melting eyes, the tail and of course, the smile that on the darkest of days can make life worth living.

People (of privilege) are able to wear shoes to protect their often-soft feet and to replace those shoes once the shoes are worn.

Dogs, however, have only their four paws to carry them through life. Their paws need some looking after considering the importance of their job, and dog paw balm is one tool every dog owner should know about and have in their dog care kits.

Dog Paw Balm: Protecting Your Pet, One Paw at a Time

Dogs of all breeds are incredibly hardcore. Their paws might be sore, cracked or cut, and they will leave behind a trail of blood, but won’t stop running around and wagging their tails. It is only when their pain becomes excruciating that they show us how much it actually hurts. Unlike humans who would use crutches and avoid putting pressure on a foot until it has healed, dogs won’t be very compliant with such a recovery plan. It would be a mistake to let your dog’s paws become damaged by not applying balm or covering them up with dog paw mitts.

In most cases, all the pain, suffering and frustration caused by paw injuries can be avoided by using dog paw balm. Not only can it help to heal and repair cracked and damaged paw pads, it can help to prevent a dog paw injury from happening at all.

The dog paw print is a universal symbol known to all dog lovers, it means to love, but there is more to it than mere sentiment.

Unlike humans who are able to manage heat by sweating from all over their bodies via homeostasis, dogs have limited ways of dealing with heat, especially during the summer. They pant to get cool, and they can also sweat a little through their paws.

A dog’s paw has 5 paw pads, each of which has a thick layer of fatty tissue under the skin. These pads are nifty shock absorbers, which ease the pressure on the dog’s joints. However, the pressure might be eased on the joints, but the paw pads bear the brunt of the impact.

As puppies, paw pads are very soft, very pink (sometimes spotty), and very sensitive. As the dog grows up, ideally the skin should become tougher and harder, and much less sensitive.

If the dog is more of an inside dog, or if the poor soul has spent a long time in a shelter, chances are the skin on the paw pads hasn’t had a chance to toughen up, leaving them more sensitive than the paws of their outdoorsy peers.

Whether the Weather is Cold or Hot: Dog Paw Balm Helps a Lot

Using paw balm as preventative care is always a good idea, and when it comes to extreme weather conditions, it can have a massive impact.

In extremely cold weather, the paw pads can easily become dry and cracked. When your doggo is prancing around in snow or on ice, there is not only a danger of that snow getting stuck in-between their toes (which could lead to frostbite amongst other things), but the presence of snow and ice generally means that deicing chemicals have been spread around the area.

Anything from antifreeze to salt will not only aggravate the skin on your poor pup’s paw pads, but it is quite likely that your dog will lick it off of his paws after the walk, and needless to say, the ingestion of such chemicals can have devastating consequences.

Paw balm creates a semi-permeable barrier which protects the skin on the pads from anything they come into contact with.

In the same way that the dog paw balm forms a protective layer to prevent damage from extreme cold and chemicals, it is a miracle for providing insulation from extreme heat conditions.

Although they can sweat through the skin on their paws, that will never suffice to keep their paws cool enough when walking on blistering hot concrete, asphalt or sand. The paw balm will create that protective barrier, ensuring that your pupper’s paws stay moist and happy. 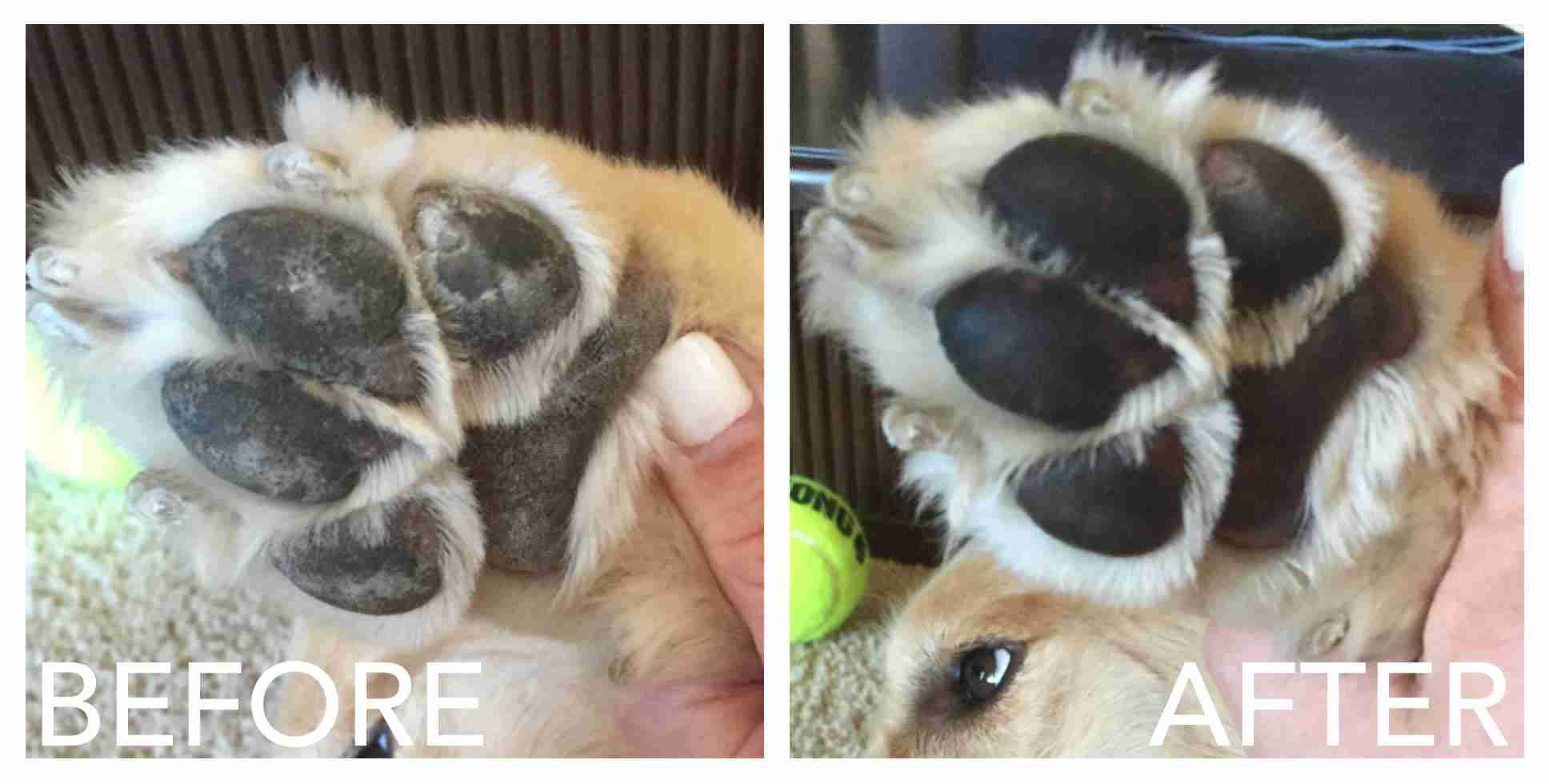 In certain cases, when the terrain is extreme, or your dog’s paws are very sensitive, you may need to consider booties to protect their paws, but in every case, a dog paw balm is a great tool for general dog paw care.

Paw balm can help prevent damage to the skin on your dog’s paw pads, but it can also help to soothe and repair sore, damaged and cracked pads with its healing and moisturizing properties.

An added bonus is that if you are using a dog paw balm made from all-natural organic ingredients when your dog (inevitably) licks at his paws and ingests it, the balm is completely non-toxic and therefore, harmless.

Note: You can use paw balm as general paw care, preventative care or to aid in a healing/repairing process, but be careful not to use it too often and thereby making your dog’s paws too soft and sensitive. The pads need to be tough.

Dog Paw Care: How to Treat a Dog Paw Injury

You can use water with an anti-bacterial soap, and be sure to remove any debris which might be in or around the paw pads. If there are objects lodged deep within the paw pad get to a vet for assistance with removing the objects.

2. Get the bleeding under control

This step shouldn’t take too long unless the injury is severe, in which case you would need to take your dog to a vet.

Making the call of whether or not to wrap the foot up is often a tricky one.

Ideally, you would want the paw to stay dry, which would mean not using a ton of ointment a bandage, but as most dog owners know, the doggo would probably cause a lot of damage by walking on the wound and more so my licking it.

If your dog is very active or an obsessive licker, wrap up the entire foot to above the ankle with some gauze on the pad and Vetwrap over the rest. However, if your dog’s paw injury is beyond your control, PetMD suggests that you should take it to a local vet for more help.

4. Monitor the injury and change the bandage daily.

The last thing you want is for the wound to fester in its bandaged casing, so monitor the healing process, and if it looks even vaguely like it’s not healing properly or is getting worse, then it’s time to have a professional look at it.

Dog paw palm and dog paw wax are very similar. Both will tick the important boxes when it comes to protecting a dog’s paws and moisturizing or repairing them.

However, wax and balm can differ as much or as little as one balm brand from another and differ as much in price as in ingredients. The ingredients in most balms and waxes will involve some or other combination of waxes and oils, all with the goal to protect, heal and soothe paws.

What’s most important when choosing either a balm or a wax, is that you go with one that is non-toxic, non-allergenic, is easily absorbed and which safely moisturizes.

If the injury is not severe, you will most likely be able to treat the injured paw yourself.

First, ensure that the paw and the pads have been wiped clean and patted dry. Then rub a thin layer of the balm all over and around the pads. If your dog hates having someone touch his feet, you might want to start giving him regular foot massages to get him used to your touching his feet. This will hopefully mean that next time you need to apply the balm, he doesn’t make a fuss.

Hopefully, the balm absorbs quickly, but if your dog is a licker, you may need to pop a sock or some gauze and Vetwrap onto the foot (reaching above the ankle) to prevent them from licking off the balm and licking the wound bigger.

Which Paw Balm to Buy?

If you are unsure about where to start when deciding on a brand of dog paw balm or paw wax, then it can’t hurt to go with a product that is not only endorsed by vets. It’s a popular choice for dog owners who are conscious consumers and prefer buying organic and all-natural local products.

It is the responsibility of any pup parent to make sure that all of their fur-children’s needs are met, and this includes the care of their paws.

A tattoo on your dog’s paw print might be a beautiful way of letting the rest of the world know how much you love your dog, but don’t forget to show your dog how much you love and care for them by making sure that they are happy and healthy from the head-to-tail (and toe).

They won’t care so much for the tattoo, but if you are looking after the state of their paws, they will be able to be the best version of their doggo selves and will be able to focus on their most important task in life: to love you.

Dealing with a “No Pet” Zone? Qualify Your Emotional Support Animal!

Animals provide comfort for so many psychological and emotional symptoms! Emotional Pet Support (EPS) can help provide information and assistance to avoid exclusion from housing and travel due to your disability. This means HOA’s, co-ops, landlords and property managers cannot discriminate against a person with an approved Emotional Support Animal with a qualified ESA letter. Landlords cannot prevent the person and their ESA from obtaining the housing that is needed—even in “No Pet” situations.