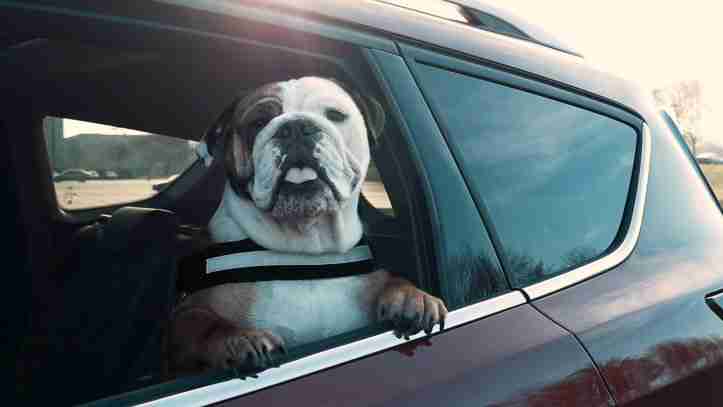 For many people, dogs are a part of the family. But whereas most people wouldn’t dream of allowing their children to travel unrestrained, the same is not true for their pets. Occasionally, you would see a dog freely sticking its head outside of a car’s passenger-side window. That happens much more frequently than a child without a seatbelt.

Car safety statistics for dogs show that about 84% of dog owners do not properly secure their dog when traveling. 60% of drivers said they are sometimes distracted by their dogs when driving and 54% admitted to petting the dog while driving. Properly restraining your dog do so is a legal requirement in many countries, and it is recognized that this is not only safer for the animals but also for drivers, passengers and other road users.

During testing, Rene enlisted Emil’s help to ensure the biggest possible crate could be accommodated in the Focus wagon boot space. As a result, the vehicle can comfortably carry even an Irish Wolfhound, the world’s tallest breed of dog.

Of those dog owners surveyed who said they did not always secure their pets, 32% said it was because the animals did not like it, 31% claimed there was no need when undertaking short journeys, and 14% said they did not have room for a dog crate.

More than 1 in 4 of those who carried their dog unsecured admitted that their pet had poked its head out of the window (26%). Some said pets had previously jumped out of the window resulting, on occasion, in the pet being killed or injured. Owners also admitted being involved in accidents after being distracted by their pets, that dogs had turned on indicators, obscured the view ahead and bitten occupants.

Insurance claims can be invalidated if pets are not safely restrained in the vehicle and it has been estimated that if a car crashes at a speed of 40 km/h (25 mph), an unrestrained dog can develop projection forces that are about 40 times its weight.

How to drive on the road with a pet nearby was last modified: July 7th, 2020 by Emotional Pet Support Team