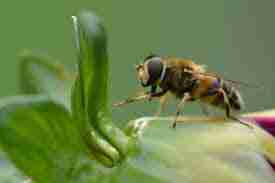 As a dog owner you are probably aware that many dogs and emotional support animals are very playful and inquisitive creature! However, this sort of behavior can unfortunately lead to unwittingly stirring up an angry hive of bees or other insects from time to time.

The chances of a sting are much higher during the spring and summer months due to the larger number of wasps and bees. The following may be early signals of a sting:

If you notice both of these signals at the same time, or your dog appears to be in obvious pain, you should immediately check them over for a sting. After the sting takes full effect, you may notice your dog breaking out in hives, swelling or in serious cases difficulty breathing due to a severe allergic reaction. If your dog appears to be struggling to breathe, seek emergency medical attention. The most common sting areas on dogs are around their faces and mouths from investigating a stinging insect a little too closely, though stings are also common inside the mouth. Stings inside the mouth are serious and require urgent veterinary attention as they could cause the airways to swell.

Stings are often caused by your dog investigating a stinging insect too closely, or even catching one in their mouth (wasp and bee stings in dogs are the most common).

Scour your dog for any visible stinger, which may be difficult to see. The affected site may become more obvious as swelling begins. It’s possible your dog will be trying to paw at the area where he or she was stung which can also clue you in.

Though you should contact your vet immediately, there are steps you can take in the meantime to give immediate treatment to your pet:

Dogs – How To Deal With A Sting was last modified: February 25th, 2019 by Emotional Pet Support Team