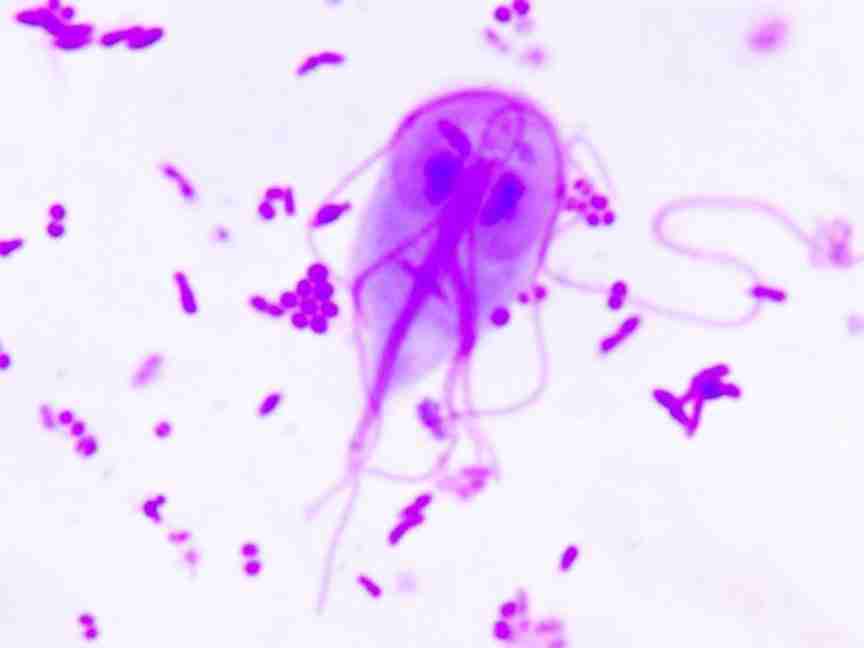 Giardia is a parasite which sometimes infects dogs. Though it is a parasite, it is atypical in that it is simply a single-celled organism. It feeds off your dog by latching to the intestinal wall, with the damage most often resulting in diarrhea. In younger dogs or dogs with a weakened immune system, the symptoms are most often far more severe. Giardia usually spreads through drinking contaminated water.

Giardia intestinalis, also known as Giardia lamblia, is a single-celled parasite which is spread in its “cyst” form. When a host ingests the “cyst”, it transforms into a feeding form which is able to latch onto the intestinal wall to feed and multiply. Dogs usually become infected with Giardia by drinking contaminated water. However this is not the only way the infection can be spread. A cystic form of the parasite sheds is passed in fecal matter, and dogs can also pick this up through ingestion or sniffing. Dogs may become infected without developing symptoms.

For this reason it’s important that you watch your dog closely when going on scenic walks, and stopping him/her from ingesting soil or drinking water from natural water sources. You should also follow the same advice, as travellers who have drunk the water of contaminated streams have been known to be infected.

Symptoms of Giardia in dogs

Giardia can be noticed by a sudden onset of diarrhea. This diarrhea will usually be foul smelling, watery and tinted green. You may also notice excess mucus and traces of blood.

Also, Giardia may be asymptomatic. This means that it is difficult to detect because you won’t be able to notice any common symptoms.

Your vet may attempt to diagnose the presence of this parasite by taking a stool sample, or may use a zinc sulfate flotation solution in an attempt to detect the presence of cyst-form Giardia. However, in many cases the vet will treat your dog based on symptoms and your pet’s response to the medicine.

Many typically used parasite medications are ineffective in the treatment of Giardia in dogs. Vets usually opt to use metronidazole for dogs, however, Panacur for dogs(fenbendazole) is also used from time to time, particularly in pregnant animals.

If you suffer from an illness which puts you at an increased risk of infection, you should practice extra care when disposing of your dog’s waste.

To prevent Giardia infection, practice care and avoid allowing your dog to drink water from rivers/streams, and do not let him or her ingest soil.