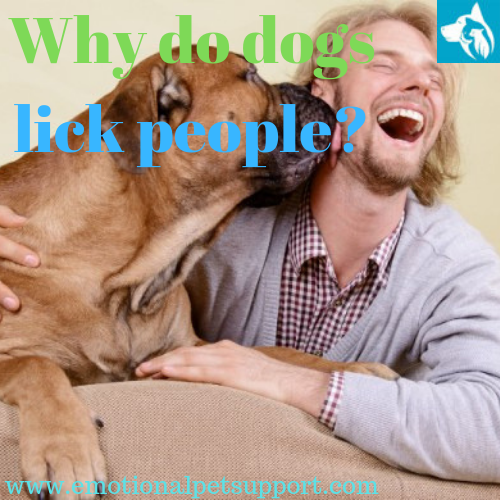 When dogs lick people, it causes different reactions. What one person finds totally sweet, may cause disgust in others. What you, as a dog owner, should know when your emotional support dog is in lick mode, read this article.

Whether the hands or even the face – what exactly does a dog want to express when he licks people? Does it make sense to forbid the cold muzzle such kind of approach? To answer these questions, it must first be clarified where this behavior of your four-legged friend has its roots.

Why do dogs lick people – the origin

Immediately after birth, the mother begins to lick her puppies thoroughly. She does that for several reasons. The licking serves hygiene and helps the mother to accurately absorb the smell of each puppy. In addition, the mother makes sure that her little ones feel comfortable with her right from the start. In addition, by licking the digestion of puppies are promoted once they have eaten.
For the puppies, licking first of all means the feeling of love and security. It only takes a few weeks and the kittens also lick other quadrupeds from the pack – it could be that these dogs also sting out predigested food for the little ones. Licking is therefore a very practical aspect of nutrition as well as feelings of affection and submission.

Why do dogs lick a human?

When dogs lick people, it can have different meanings. These include:
● affection
● subservience
● communication
● arouse attention
● Exploration
● Taste the dog owner
If it is a baby that is licked, the fur nose shows above all her affection. If it is an adult, it could be a mixture of affection and servility. But it is also possible that the dog wants to communicate something else. For example, if he wants to eat something. Or the four-legged does not feel enough attention and wants to attract attention.
Also the pure attempt to explore the respective humans, could be behind the licking. After all, dogs perceive their environment mainly with their snout and tongue. In addition, each dog owner has for his four-legged friend a very distinctive, unique smell and taste. What would be closer than to insure itself regularly this characteristic?

It is true that the dog saliva is not safe for us. After all, the dog is in many places on the road, where there is a real danger that he receives in his dog mouth for humans unhealthy pathogens. In this respect, it is recommended to avoid licking the face.

It would be wrong, however, to completely forbid the dog licking. Finally, the four-legged about the licking wants to show, among other things, his affection and could not properly classify a ban. So let it be, if your companion wants to lick your hands – it will strengthen your bond. The subsequent hand washing is done quickly.