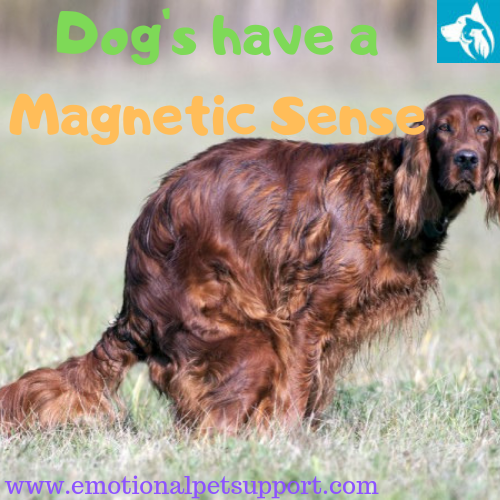 Dogs have a great sense of direction, as most people know. Often, the four-legged friends seem to return home without any problems, once they have escaped. Now, researchers have found something remarkable, dogs can perceive the earth’s magnetic field. Dogs make a great emotional support animal for this reason because not only do they have this unique ability, but they also are great companion animals.

Not only can dogs smell and hear excellent, they also have a sixth sense.

Dogs have a magnetic sense

Birds have it, as well as some fish, snails and possibly also cows: the magnetic sense. These animals can perceive the orientation of the field lines of the Earth’s magnetic field and orient themselves on the basis of these lines. Birds use this masterfully during bird migration. Foxes set up their “mouse jump” on the north-south axis of the magnetic poles and cows graze mostly in north-south direction. That even dogs feel the magnetic field, is still a very young realization.

When going for a walk becomes science

Researchers led by zoologist Hynek Burda at the University of Duisburg-Essen worked on this case. In their study, the scientists examined how 70 dogs of different breeds position themselves when they are doing their small and big business in the wild without a leash. Taking into account factors such as time of day, awareness of the site and environmental conditions, more than 7,000 cases were recorded. In the subsequent static evaluation, Burda and co. First noted that there is no specific body orientation of the animals or no pattern according to which the dogs empty the bladder and intestine.
It became exciting in a further analysis: The documented data were re-evaluated taking into account the fluctuations of the earth’s magnetic field in the period of data collection. It turned out that the skin subjects were following a pattern while relieving themselves. The dogs mostly lined up along the magnetic north-south axis. However, they only did this in phases when the earth’s magnetic field was calm. For information: There are magnetobservatories that register the direction and intensity of the field lines and publish them online. The conclusion: Dogs have a proven ability to sense the magnetic field and use it as well.

Most dog owners will not be surprised at the results, as they will have experienced often enough that their four-legged partner can orient themselves very well or has an excellent sense of direction. How or with what the animals perceive the magnetic field exactly is not yet clear. There are indeed cells that are responsible for magnetic perception, so-called magnetic cells. These could not be located in the dog yet.

Orientation of dogs: Do they have the magnetic sense? was last modified: May 24th, 2019 by Emotional Pet Support Team