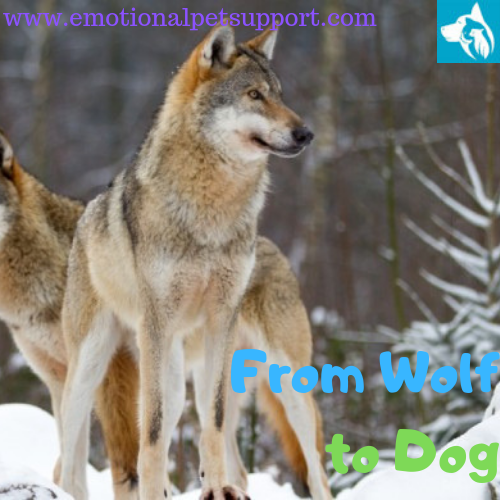 When is a dog a dog and not a wolf anymore? Scientists have the answer to the question. Strength has played an important role in the development from the wild wolf to the tamed quadruped.

For a long time, the wolf was driven out of the German lands, but gradually the news is growing that the “wild dog” is also back home in Germany. Wolf and dog are soon “united” again. It was the human being who nearly wiped out the wolf for fear of chickens, cattle, and his own life. A look back into the past reveals that the wolves that lived near humans developed from wild animals into tame dogs.

However, this process took several thousand years of evolution. As experts now know, human skill in the domestication of wildlife has only been a part of development. No less important was the strength contained in the food that the wolves were able to steal in human proximity.

Genetic changes due to starch in food

Researchers at Swedish University in Uppsala found that wolves living in close proximity to humans were more likely to eat vegetarian foods. In particular, waste from cereal products could have played a decisive role in the evolution from wolf to dog: today’s domesticated domestic dogs are able to utilize the starch contained therein much better than their wild relatives.

Thus, such wolves, which at that time could tolerate starch better than others, no longer depended exclusively on meat as a source of food. They were more capable of leading a life in the presence of man. This took advantage of this and created over the millennia by breeding the desired behavioral traits. The interaction of strength in food and the breeding skill of humans thus transformed the wolf into the faithful house dog.

This makes a difference between dog and wolf

Today, wolves and dogs are two completely different genera. Even if you were to domesticate a wolf as a puppy, it would not lose certain traits and behaviors. It would still remain a wild predator, showing only a little trusting, but shy and unpredictable. Even though wolves have a certain confidence in humans, this has nothing to do with the bond between master and dog.

Researchers also found that the puppies of the two genera differ greatly in their behavior. Wolf cubs are two weeks earlier than puppies on their first reconnaissance tours through their territory – at an age when their vision and hearing is not yet fully developed. They rely entirely on their sense of smell. If a few days later, eyes and ears are mature, they are easily frightened by the human voice.

Dogs, on the other hand, explore the environment a little later; namely, when all three senses have matured. Words and gestures of man are among their first sensory impressions, they are familiar to them from an early age. That’s why they are not afraid. A prerequisite for the later relationship between fur nose and owner.

From wolf to dog: nutrition, strength and man was last modified: May 24th, 2019 by Emotional Pet Support Team