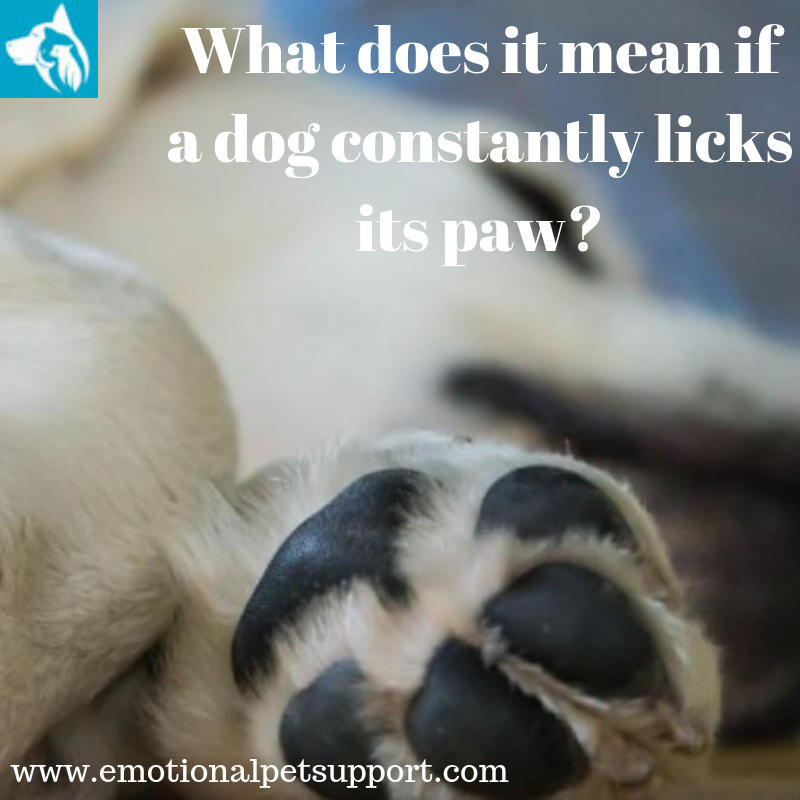 It is not unusual for a dog to lick its paw every now and then. However, if your four-legged friend does this longer and more often than usual, you should be careful. What causes behind paws lick can be betrayed here.

Since dogs, unlike humans, can not communicate, it is all the more important to pay attention to signals and behavior of the quadruped. Licking paws, for example, is normal to some degree, but it takes overhand and licks your dog’s paw constantly, should not be taken lightly.

If your dog despite sufficient spill and sufficient activities to lick his paws not calm and he even at night constantly licking his paw, then that is questionable behavior.
Licking paws can promote inflammation of the skin and the claw bed. In dogs with a light coat color, licking also tends to darken the coat.

What are the causes?

If your dog licks his paw all the time, it is often interpreted as a symptom of boredom, stress or abandonment. However, before a mental health problem is considered, medical causes should first be examined. And that means: off to the vet! This can determine the exact reason and help your four-legged friend. For example, the following diseases can get stuck behind a constant paw:

One possible diagnosis if your dog licks his paw continuously is demodicosis. This is caused by so-called Demodex mites, which prefer to multiply in skins. A demodicosis is accompanied, among other things with hairless skin, redness, dandruff and often itching.
A microscopic examination at the vet provides information on whether her dog has been attacked by the parasites. Incidentally, demodicosis is favored by cortisone. Also, some breeds are more susceptible to the disease than others. This is the case, for example, with the Shar-Pei, the West Highland Terrier, the English Bulldog, the Scottish Terrier, and the German Shepherd Dog.

Are intercostal abscesses the cause?

Even toe zits can get stuck behind an excessive paw. It is a bacterial infection of the intermediate toe skin. In doing so, hair shanks penetrate deeper skin layers of your dog. The result is blisters, redness, greasy pads and wounds between the toes. Antibiotics, antiseptic baths or ointments can be used to successfully treat intercostal deaths.

Is there a yeast fungus behind it?

If your dog is constantly licking his paw, the veterinarian will certainly examine your dog for yeasts. Yeast fungi, also known as Malassezia, can cause inflammation of the inter-fore skin.
Yeasts belong to the normal skin flora of the dog. However, if the conditions are favorable, as is the case, for example, in a warm and humid climate, then they multiply and unfold their pathogenic effects.
In any case, if the vet finds yeast fungus in your dog, then therapy with a suitable shampoo is usually sufficient. As a rule, then the paws lick one.

Foreign body in the dog paw

Last but not least, a foreign body can be responsible for your dog licking its paws and between its toes. Once invaded, you often do not see them anymore, but you can be painful for your partner on four paws. Whether it is a piece of broken glass, a needle, a thumbtack or a cereal pan, any foreign bodies in your dog’s inter-toe room must be surgically removed. Only then does the paw lick your four-legged friend’s an end. It’s always a good idea to try and keep your home pet-friendly and clean.

What does it mean if a dog constantly licks its paw? was last modified: May 25th, 2019 by Emotional Pet Support Team