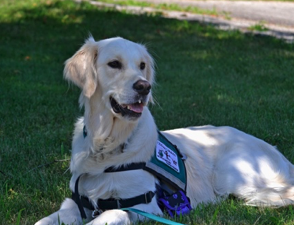 Pet owners are often surprised to learn that dogs, not unlike humans, experience anxiety when confronted by certain situations. Since dogs aren’t always able to correctly analyze events, they may experience varying stress levels when separated from their owners.

Separation anxiety in dogs is far more common than many people realize. A North American study revealed that between 20% – 40% of dogs referred to a behaviorist were suffering from this condition. What’s more, separation anxiety can potentially manifest itself in more than one way.

When left to their own devices, some dogs will experience only a small amount of distress. This may result in them sitting waiting for an extended time by the door or a noticeable bout of lethargy. But to other dogs, separation anxiety can be experienced to such an extent that destructive behavior becomes commonplace.

This type of behavior can take on several forms. Examples of separation anxiety-induced destructive behavior range from crying to barking, and even howling for hours on end. But it doesn’t end there.

Compulsive chewing or digging are also symptoms, as are obsessive-compulsive disorders such as the pulling out of fur.

When trying to understand why dogs grow anxious from being left to their own devices, it’s important to keep in mind where they came from. How they used to live and act before they became domesticated is also important.

Our best friends now may not resemble the pack of wild hounds they once were, but that doesn’t mean huddling together isn’t still part of their nature.

Consider how some dogs may appear perfectly happy to socialize with dogs living in the same home, even when not from a similar litter. Then, compare that to how they behave when suddenly confronted with a whole new world of smells and sensations accompanying a dog they’ve never met. Since the strange dog isn’t regarded as a member of their tribe, dogs sharing a home will often display hostile behavior towards those they see as not belonging.

The bottom line is this:

Dogs weren’t always domesticated. By nature, they’re pack animals and hunters who prefer to stick together rather than go at it alone. When they join your family, you become part of that pack. And when you leave them alone for an extended period, they may become anxious, even if surrounded by their other 4-legged friends.

Fortunately for pet owners, there are some steps easily taken to relieve separation anxiety.

As a rule, most dogs are very energetic. And since anxiety is known to create even more energy – albeit the negative kind – an anxious dog may end up with a great deal more pent-up energy than before, which is just one more reason to exercise your dog regularly.

Exercise is a widely accepted antidote for stress and anxiety. In humans, there’s nothing quite like a good old jog or even just a brisk walk for alleviating the symptoms of stress. Dogs are no different. Regular walks and other outings and excursions can go a long way toward alleviating distress and anxiety in our canine companions.

Resist The Temptation To Fuss

Most of us know exactly what fussing refers to. And even more of us derive great joy from doing exactly that before we leave home and when we return. Dishing out hugs, kisses, and promises to be back before you know it only serves to make an already-precarious situation worse.

Instead, rather try to leave the house or yard unnoticed, without all the pomp and performance. Keep comings and goings without emotion. When departing, slowly turn your back and walk away. The same goes for your return. Again, if your dog reacts wildly whenever you get home, don’t give in to the party by joining the festivities.

Leaving and returning home should be treated as uneventful occasions to prevent your dog from assuming something out of the ordinary has occurred. But in order to allow your dog to relax about your leaving the house, you must first assume a relaxed composure.

Always remember, your dog takes his cue from no one other than you. How you act and feel are an indication to your canine companion of how he should be acting and feeling.

It’s no secret: most dogs are super-smart. It’s part of why we love and appreciate our best friends. As such, dogs are generally very attuned to patterned behavior since they’re essentially creatures of habit and routine.

Our dogs are absolute experts at picking up on so-called tells. These are clues that we inadvertently fall into the habit of dropping whenever we’re about to engage in a specific activity or action – such as leaving the house.

Exiting clues or tells include picking up car keys, reaching for our handbags, wallets, or even putting on shoes or a warm jacket. But since we can’t exactly make our exit without keys, bags, and so on, it wouldn’t be of any use to resolve not to drop these types of clues.

Instead, rather endeavor to defuse the clues by also dropping them when you’re not planning on leaving home.

Helpful actions would be to set your alarm on a Saturday morning only to go right back to sleep, or to get dressed for work before cooking dinner in the evenings. Performing these simple tell-throws will eventually completely eradicate the fear factor experienced by your canine friend when he sees you doing those things he associates with you leaving.

Treating anxiety in dogs takes time and patience, and in some cases, you may need to explore other treatment avenues such as calming treats or CBD oil. However, if you start with implementing these simple tips, you can make your four-legged companion feel far more confident. Often anxiety becomes a behavioral tic, and it simply needs to be untrained and good, healthy habits ingrained in place.