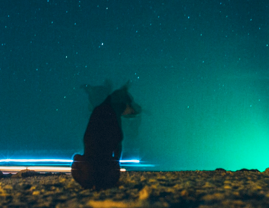 Throughout the years of studies, experts have found out that dogs’ eyes are different from the composition of humans’ eyes. One of the main reasons dogs see recently is that their eyes are known to ENT structure when differentiated from the structure that humans’ eyes have. In addition, dogs have some parts that humans do not have. Some of the other main reasons are:

Both the eyes of dogs and humans are known to be made up of receptors. They are classified into two types—the first one is rod while the second one is a cone. These two types of receptors function differently, and it is found out through some researches that they differ in numbers too. In fact, the number of cones that the human eye has is higher when compared to the number of rods that dogs have.

The eye’s cone receptors’ primary function is that it causes the eye to see and recognize many colors. The number of receptors in humans’ eyes is enough to recognize three colors—green, blue, and red. Dogs have fewer receptors when compared to how many receptors that the human eye has. That is why they are only able to detect two colors. As of now, studies and researches are still not enough to determine what those two colors are. But a lot of experts say that it could only be yellow and blue. But there are still some arguments about what colors they see because experts are still conducting some further studies about it.

Another thing that makes the vision of dogs different is the number of rod receptors they have. The eyes’ rod receptors are the ones that cause the eye to see in dark or dim conditions. When compared and differentiated, dogs have way more rods when compared to how many that the human eye has. That is why dogs are better at seeing at night and in dark conditions. While humans still need the best night vision goggles to have the best vision at night, too.

Dogs are also known to have an additional layer of tissue located behind their eyes’ retinas. This extra layer is called tapetum lucidum. This additional tissue layer’s primary function is that it reflects more light to enter through the retinas of the eyes. With more light that is entering, the brighter the view of the surroundings will be. And that is another reason that makes the vision of dogs really different from the vision of humans.

There are still many things that experts do not understand when it comes to dogs’ eyes. But it is still evident that they see the world, the surroundings, and other objects differently. But for now, those are the main reasons why dogs have a very different vision when compared to how humans see the world.  Don’t forget to keep your pet with you, look into an emotional support dog for assistance.