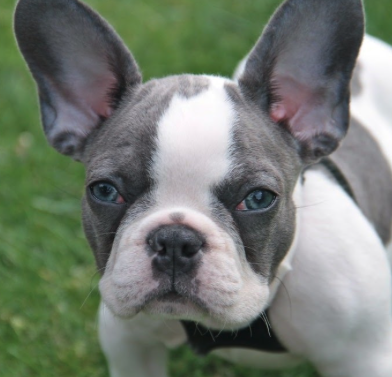 French Bulldogs are one of the cutest dogs but are prone to some diseases as well. French Bulldogs or Frenchies are available in a dozen coats. They are also available in some rare colors such as lilac, Isabella, and blue. However, it’s not just their colors but their eye color as well which attracts everybody’s attention. As a lover or owner of this breed, you must have wondered how your dog got blue eyes. Hence, all your doubts will be cleared in this article.

Off late, it has been noticed that people are inclined towards buying Frenchies with blue eyes. Frenchies can have blue eyes for various reasons. The prime reason for that is mostly found in Merle French bulldogs and S-locus piebald pooches. Hence French Bulldogs with blue eyes happen if the Frenchie carries the recessive gene. It also depends on the carried gene and that may result in 1 eye of blue color and 1 of brown. Also, few breeds have blue eyes such as three-colored Australian Shepherds, and Siberian Huskies among others. The reason though is unexplained in them. This is natural and hence should not look at them as if they have an eye infection. While some love it, some discard them as they feel they need a vet to check their eyes.

Do Their Eyes Stay Blue Forever?

Just like some humans are born with blue eyes, some puppies too are born with blue eyes. The ring around the pupil is always black while the ring around the iris is blue. In the newborn puppies, the color of the eye becomes blue due to a known pigment called melanin. If your puppy has developed blue eyes means there is little melanin in his/her iris. Since the puppies spend several months in their mom’s belly and are not exposed to sunlight, the eye color can turn blue to the mentioned pigment. After 10 weeks of their age, the dog will develop a permanent eye color. Hence, if it is blue, it will always stay blue. If your French Bulldog’s nose becomes pink it means it is time to pay attention to his/her health.

Heterochromia is a common condition that happens to your dog when he/she has eyes of different colors. In addition to dogs, this condition is also witnessed in mammals, and humans as well. Heterochromia can be described under two types such as acquired and congenital. If your Frenchie has acquired heterochromia, you should rush your pooch to a vet as he/she might have contracted eye diseases such as Cataracts, or Glaucoma. If your Frenchie has naturally blue eyes then it’s ok otherwise your French Bulldog is at risk of some health issues.

French Bulldogs with blue eyes look attractive than others but that can lead to significant health problems in your dog as compared to a brown-eyed French Bulldog. Let’s discuss some of the disorders that a Blue-colored Frenchie might develop at some stage of their life:

Hearing loss or deafness is quite common in Frenchies with blue eyes. This is limited to breeds such as Merle and Piebald genes. Merle gene congenital deafness is associated while the Piebald gene can cause complete deafness because of a lack of melanin-producing cells (melanocytes) within their inner ears. Affected puppies will always be at risk for instance road accidents. Congenital deafness can be cured through a test called the BAER test as soon as they are over 6 weeks old. If you have realized that your dog is completely deaf then you need to learn tips on how to communicate with a dog who is deaf. Getting a dog ID tag and a collar for deaf dogs becomes compulsory in those cases to keep the people around safe and aware.

Blue eyes are also an indication of vision defects. A French Bulldog with a blue eye is a signal that he/she may be carrying the merle genes. Also one should note that this doesn’t mean that at some stage they will go completely blind. In cases where both the parents carry the gene of Merle, blindness is more likely to occur otherwise not. In addition to blindness, there are other eye problems that a Frenchie can develop such as:

Cherry eye is a condition when your Frenchie develops red-eye. This is an eye syndrome and in such cases, take your pet to the vet at the earliest. To keep your French Bulldogs eyes in good health use daily eye care bites.

If the breed of the Frenchie is among the 2 that we have talked about then it’s fine. If you are unsure about their families and find a Bulldog with blue eyes then avoid buying him/her. If in doubt get a complete health check-up done to make sure that your puppy doesn’t just look attractive but is healthy as well.