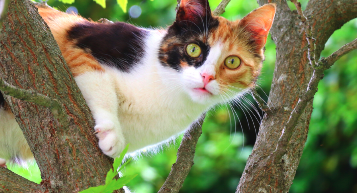 Just like other cats, the calico kitty can be wild, sweet, and full of personality. Calico cats are known for being multicolored and mottled. The term calico refers to cats with coats that have at least three different colors. The most common colors seen on calicos are white, tan/brown, and black while some others might have smatterings of orange or gray instead. While there are many things to know about these beautiful felines, there are some interesting facts only true cat lovers can appreciate. Calico is a color, not a breed We have covered that calico refers to cats having a multicolored coat. However, it’s important to note that some people still think that calico refers to a breed. In fact, a calico colored cat can show up in most every breed of cats.

From Maine coons to Japanese bobtails, a calico can appear as long as the genetics are right. One common misconception when it comes to these colorful kitties is that they are tortoiseshell cats or torties. However, torties only have a mixture of two colors. Calicos and tortoises can have similar markings, but calico cats will always have a third color. When it comes to personality and physical traits, a calico will also not have any
distinguishing characteristics based on their color. Their personality, lifespan, and weight will be determined by the breed they are and how they are raised. For example, if a calico is an American Shorthair, it will live between 15 to 20 years, weigh about 10 or 15 pounds, and will be affectionate and social. Most calicos are female. In order for a cat to have the unique tri-color coat, it will need two X chromosomes. If you’re like me, and genetics weren’t your thing in school, the only thing you have to remember is that females have a combination of two X (XX) chromosomes. Male cats will have at least one X and one Y combination (XY). For a female cat to be calico, it needs to have inherited an X chromosome that has the calico trait for each of its parents.

While most calicos are female, there is a one in 3,000 chance that a calico cat will be a male. Male calicos will have the same XX chromosomes from their parents who carry the trait in addition to the Y chromosome, which makes them male. Male calicos don’t have it so well. Male calicos are exceedingly rare, and it’s probably better that way. Male calico cats tend to have Klinefelter’s Syndrome, which is a condition where they may have cognitive issues that may lead to behavioral problems as well as having more body fat and increased joint pain. They may also suffer from diabetes and an inability to absorb minerals, making their bones weaker. Lastly, because of their chromosomal pattern, they are sterile, so you can kiss your hopes of breeding calico cats good bye.
While many male calicos, especially those with the syndrome, may have shortened lives, it’s possible that many male calicos can have full and happy lives with the proper treatment and care.
Final Thoughts
Because calico cats are rare, they have been said to bring good luck not only in the United States but also to Japanese sailors who traveled the world. In other cultures, it’s thought that calicos can cure anything from heartache to warts. Lucky or not, these beautiful felines have taken a place in many hearts around the world.