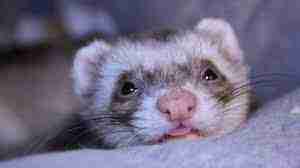 Ferrets are cute, lovable, and one of the most energetic pets you can ever get for yourself. There’s not much hassle keeping one if you know how to take care of it. A good pet isn’t just an animal, it is a companion, a part of your family. Once you think of pets this way, taking care of them won’t bother you anymore.

In this guide, we’ll talk about ferret maintenance tips as well as their health and psychological issues. You’re about to get some clear ideas on how to take care of a ferret in a few easy ways. But before talking about their health and other stuff, let’s learn a little about them and why they make such a great pet.

What Are Ferrets and How Ferrets Are Utilized?

Ferrets come from a family called “Mustelidae”. From the same family comes otters, badgers, rotters, and wolverines. Ferrets were domesticated more than 2000 years back, even before cats were domesticated. Like cats, ferrets have been utilized as a way to control pests, especially snakes, they can’t stand ferrets.

Similar to dogs and cats, ferrets require almost the same amount of care and attention. Without these, they’ll get depressed and sick. Like all living creatures, they deserve love and care from their parents.

For more details, read how ferrets are utilized.

Ferrets are prone to a viral disease called “canine distemper.” This is one of the most common illnesses that happen with dogs, foxes, and other canines (resembling dog-like animals). The good news is there’s a vaccine for it. A yearly vaccine dose for common illnesses is enough. Also, see a vet once a few months.

One of the best things you can do to keep your ferret’s health in the best condition is whenever you notice something unusual in its mood or skin, check a vet as soon as possible. This will help you take the initiative before a disease spreads beyond regular conditions.

Ferrets are similar to cats. They’re very curious about everything that comes into their view. If you can give your ferret enough time daily, which is at least 2 hours, then you can get one. But if you can’t give them the minimum attention they need, they’ll get bored and lose curiously. As a result, their health will start deteriorating.

If possible, get a pair or a group of them. This way, they’ll learn to communicate properly among themselves and be able to play together. However, getting more ferrets needs a proper mind setup. Before bringing a few ferrets home, plan about how you’d handle them properly.

As ferrets are high-activity animals, they lose their energy in a short time. Try to feed them as often as possible, preferably once in 2 or 3 hours. You can feed them regular cat foods. Both of their nutritional requirements are close.

Some people like to breed them. In fact, it can be very enjoyable to see new baby ferrets. But unless you’ve got a lot of space in your house or plan to give the babies to someone who can take good care of them, you should stay away from this idea.

Ferrets breed super fast, and babies grow up quite quickly. Most people breed for fun, and at one point, they realize they’re not mentally prepared for the extra care all these babies need. Don’t be like them. De-sex your ferrets before they become adults.

De-sexing has two benefits: first, they won’t create a bad smell from the reproductive glands when they reach maturity. And secondly, they won’t get into “heat”. Heat is a condition that happens with animals in their natural breeding season. Without heat, they won’t get aggressive or make loud mating noises.

Your ferret should run freely in your house, but when it comes to sleep and rest time, they need a safe and isolated place. Get a ferret cage as large as you can get. There should be ample room to hand toys and set up a cozy bed in the corner of the cage.

Ferrets love to play with toys. Without a few toys, they’ll get bored and nip on their claws with their teeth. They love to play with everything and anything. You can find some good ferret toys in a pet store. Don’t give them cheap plastic toys as they’re made of harmful chemicals.

Final WordsIf you can provide these three things: good food, a proper living setup, and some curiosity inducing toys then a ferret can easily live for 12/13 years. Ferret costs aren’t high, and now that you know how to take