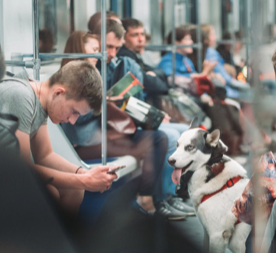 The rules for transporting animals differ depending on the method of transportation. The movement of animals is regulated by a set of rules that the owner must follow. After all, all animals are highly sensitive to changes in their environment, and noisy sounds during transportation can frighten them.

We’ve compiled the rules for all modes of transportation, including ground, subway, personal vehicle, and airplane.

In-ground transport, you can transport your dog in the back part of the transport. A large dog should wear a muzzle, collar and be on a leash. The small dog can be transported in a special container or bag. The owner of a large dog must pay for it as baggage. If you transport a small animal in a transport container that does not exceed the required dimensions of hand luggage (the total of three dimensions (height, length, width) is no more than 120 cm), then you can carry it free of charge.

Tip: Don’t put the container with an animal on the floor as it might be a little bit unpleasant because the noise and vibrations are louder on the floor. On high draughts, it can also make the animal ill.

As a matter of fact:

Of course, not everyone follows the rules for animal ground transportation. In the majority of situations, it is completely dependent on the driver and passengers. Owners sometimes do not use muzzles on their dogs because they are not used to them and there is no good reason to do so (the dog is peaceful, for example).

Transportation Rules In The Subway

However, animals can only be carried in containers in the subway. Transporting a dog in the subway in any other way (just on a leash and in a muzzle, for example) is prohibited by the rules of using the metro.

Tip: If you do want to take the dog to the subway, place it in a container if it’s a small dog. If the dog is big, make sure it is leashed and wearing a collar. Beware of escalators! If possible, use the stairs. If not, be sure to take the animal in your arms on the escalator! Unfortunately, there are terrible cases when a dog’s paws got stuck on an escalator and other similar situations.

You would need to gather medical reports for your pet in order to ride on long-distance trains.

Carrying small dogs or puppies is permitted, but only in special containers. The dog is charged as a single seat or 20 kg of luggage. Transporting a dog whose weight exceeds 20 kg. is paid according to their actual weight. Dogs are either carried in a container with an accompanying individual in the same carriage, or in the first carriage’s inoperative vestibule behind the locomotive (no more than two dogs). Dogs can also be transported in a separate compartment (however, no more than two dogs). In this case, the owner pays for the entire compartment.

Traveling Abroad In a Private Car

What documents do you need:

A container or dividing net between the dog and the vehicle interior is required in European countries. The dog is not allowed to be inside the car without a leash or container. The dog must be fastened in the backseat with a seat belt.

To travel by plane, you’ll also need a veterinary passport for your pet, which contains all of your pet’s information. According to the rules of air transportation, pets must be transported in special containers in a specially equipped insulated baggage compartment, separated from the rest of the baggage by a partition.

Small dogs should be transported in special containers in the aircraft cabin. However, no more than two dogs are allowed per salon. The animal’s weight must not exceed 8 kg.

Note: Requirements vary from airline to airline. As a result, first, make a request to the airline in which you are flying, and then follow the instructions you are given.

Tip: It is recommended to arrive at the airport with a pet in advance, no later than 4-5 hours before the plane’s departure. It’s not a good idea to let the animal out of the box on the plane because its behavior can be unpredictable. Dogs do not need to be fed before the flight, just give some water and walk them well. A moisture-absorbing mat or disposable napkins should be placed on the bottom of the box.

Sociology research paper topics writers emphasize that the comfort and tranquility of the animals are the most important considerations of animal transportation. During the journey, a pet should be cared for as much as possible, with all necessary amenities provided. And transporting your pet will go much more quietly if you have beforehand acquainted it with public transport and container.

Helen Wilson is a freelance content writer at WriteAnyPapers company. She is a wordsmith when it comes to topics about lifestyle, freelance, and traveling. Helen is a pet-lover, she has two parrots and one cat. Every month she donates money to animal shelters.